Sewing needles come in all shapes and sizes. They even differ depending on whether you are hand-sewing or using a sewing machine.

Sewing Needles for Sewing by Hand 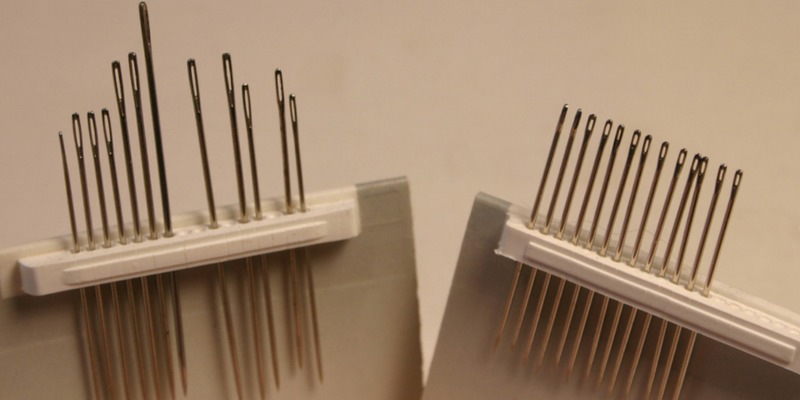 A sewing needle has three parts: the tip that pierces the fabric, the eye of the needle through which you put thread and the shaft connecting these two parts. Different fabrics require differently shaped needles; sewing needles are made to pierce fabric without damaging it.

There are 12 different types of hand sewing needles:

The most common needles used are quilting, sharp and applique needles. Leather needles have a wedge shaped tip to pierce through leather or vinyl without tearing it or damaging the fabric. A sailmaker needle is used to construct materials out of heavy canvas fabric. A beading needle has a very thin shaft and narrow eye to go through the holes in the core of beads and make beautiful embellishments with beads to fabrics. Bodkin or ballpoint needles are used with woven or knitted fabrics; they don’t disturb the knitted fibers within the material. Tapestry and chenille needles can be threaded with thicker threads and pierce through tightly woven, chunky fabrics.

There are four different types of sewing machine needles:

Universal needles may be used for most simple sewing projects and can be used on a variety of regular fabrics such as cotton.

Denim or jeans needles are used to sew the hems on your favorite jeans or any other sewing project involving tough, durable denim.

Ballpoint needles are used to sew with knit fabrics so as not to mess up their knitted fibers.

Twin needles create perfectly parallel rows of stitches without having to sew twice.

Sharp needles may be used with any woven fabric.

More from my site

Can’t Find What You’re Looking For?

Hey there! Thank you for visiting our website. Our posts may contain affiliate links. If you buy something through one of those links, you won't pay a penny more, but we'll get a small commission, which helps bring food on the table. Thanks!